Johnnie Walker, a brand that has grown stronger from generation to generation and turned into a whiskey legend, from a small grocery store in a remote town in Scotland in 1820... I will tell you the story of how it became one of the most well-known and consumed whiskey brands in the world.

Before or after this post “All About Blended Whiskeys” I suggest you take a look at my article. In this way, you will get to know both Johnnie Walker and the world of blended whiskey better.

A small shop in Kilmarnock

Named after the Johnnie Walker brand John Walker He was born on the Todriggs farm in Kilmarnock, Scotland, on July 25, 1805. In 1819, John loses his father at a very young age, and his family then puts their farm up for sale. With the money from the sale of the farm, they buy a small grocery store in Kilmarnock.

Despite his young age, John takes on the entire workload of the shop, increasing his knowledge of both products and trade in a short time. In addition to groceries, the shop also sells alcoholic beverages such as wine, rum, brandy, gin and whiskey. In addition to these, there are different spices and teas from exotic countries on the shelves of the shop. 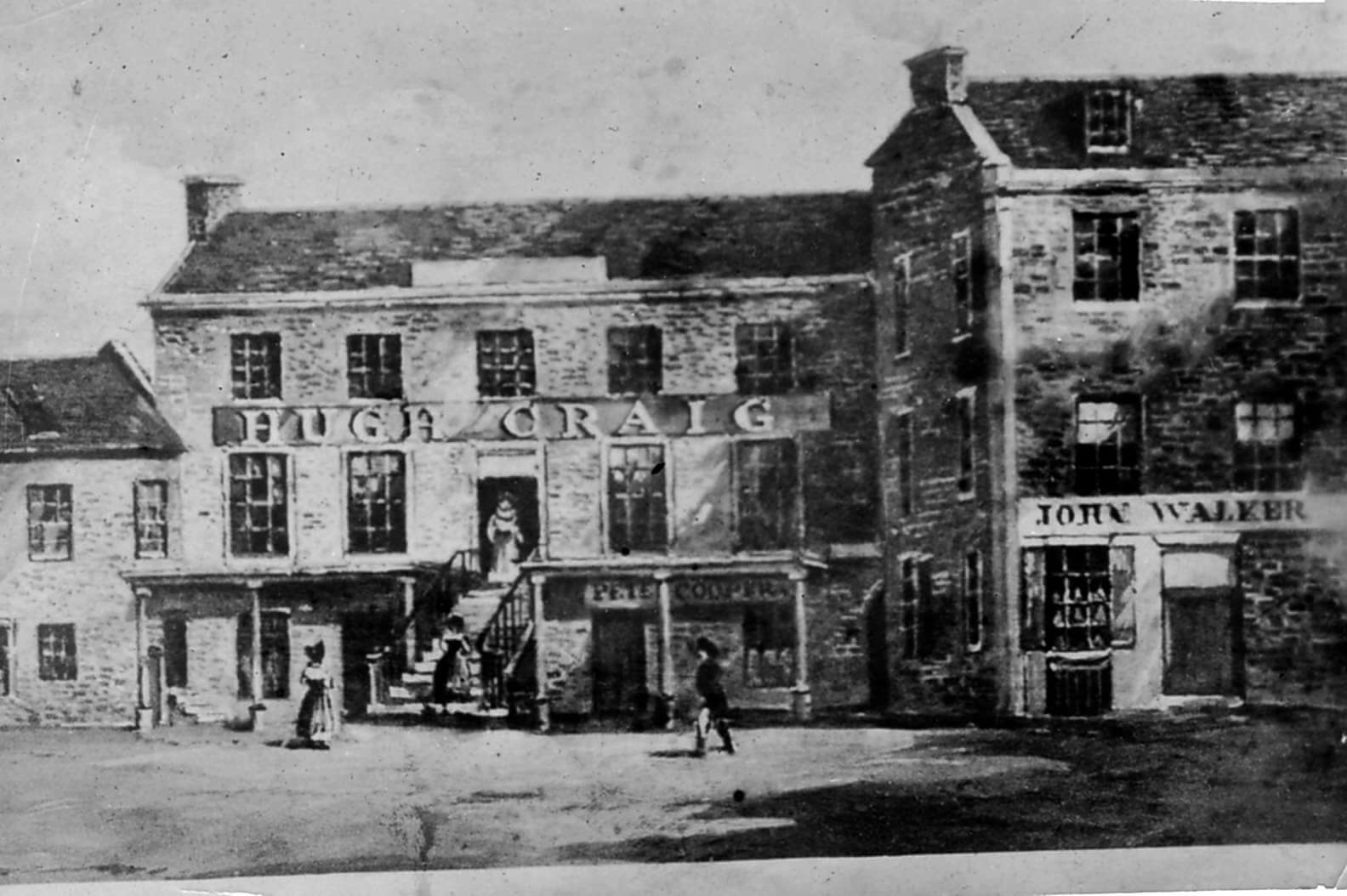 Note the little shop on the right (Credit: Johnniewalker.com)

Here "tea" We need to open a half parenthesis for it. Teas from different countries, especially China, are mixed in the shop and offered to customers in different blends. John undertakes this blending operation and he improves himself in this regard over time.

John does a similar blending operation for whiskey. He makes the blends he created in the early days on order. After receiving the orders from the customers, John tries to create a balanced blend by mixing the different whiskeys in his stock in certain proportions with the experience he gained from blending tea. It also succeeds.

The popularity of these blends, which were not sold under a specific brand name in the early periods, is increasing. After a while, John's blends “Walker's Kilmarnock Whiskey” is being sold under the name

I should point out that the Single Malt category was already very different at that time. Malt whiskeys, which had a very extreme character, were seen as difficult drinks that were not suitable for everyone's taste. However, due to the fact that the production techniques of the period did not meet a certain standard, there could be great differences even in the whiskeys produced under the same roof. John's blending efforts were precisely aimed at presenting this difficult-to-drink whiskey that does not appeal to everyone's taste, by making it a little more balanced.

Let me state that it is not legal to mix malt and grain whiskeys on this date and offer them for sale. That's why you can think of John's blends as malt blends. (See: Blended Malt)

From Scotland to the World

After John Walker's death in 1857, his son succeeded him. Alexander Walker passing. After Alexander took over the business, he focuses on expanding his whiskey business, which started to grow slowly. 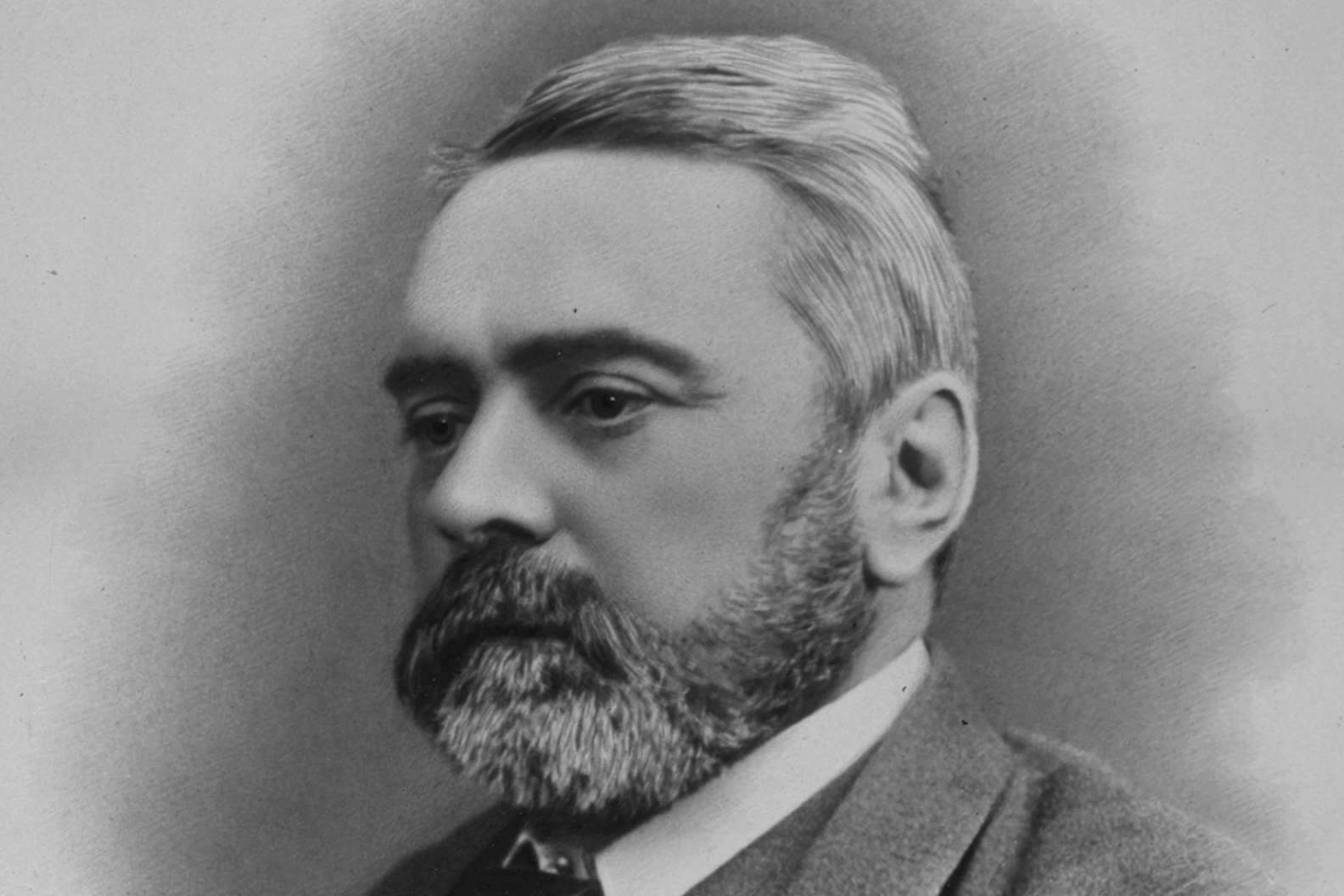 Alexander is working very seriously for branding, and in fact, he is the person who takes many steps that make Johnnie Walker Johnnie Walker today. External factors such as England being the center of the industrial revolution, increased trade and the spread of railways also help Alexander in making Johnnie Walker a world brand.

It is said that Alexander Walker constantly gave whiskey to the captains of the ships at that time. Captains who love whiskey used to offer Walker's whiskey to everyone wherever they went. In this way, we can say that Alexander has increased brand awareness by applying the first example of word-of-mouth marketing.

signed in 1860 The Spirits Act With this, it becomes legal to sell malt and grain whiskeys by blending, and thus the era of Blended whiskey begins. (For detailed information about blended whiskeys you may take a look at my article. you can take a look)

First blend whiskey of the Walker family in 1865 “Old Highland Whiskey” officially takes its place on the shelves. This blend was first used in the following years. “Extra Special Old Highland”, and then its current name, namely Black Labeltakes the . 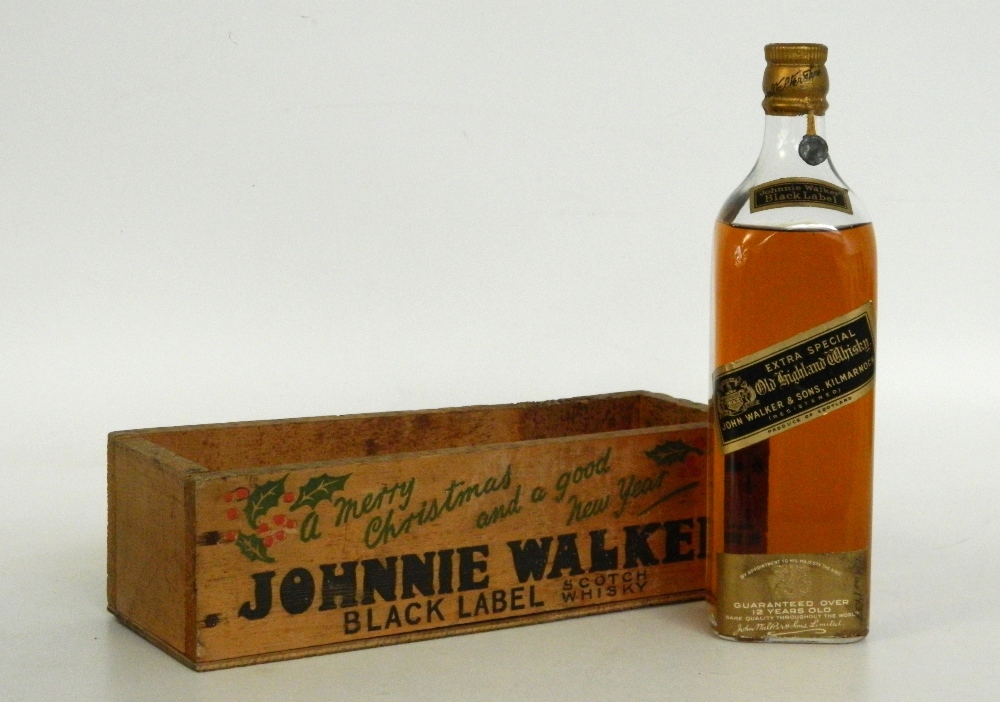 In the 1860s, we see Johnnie Walker's iconic bottle design also emerge. In the conditions of the period, there was a lot of breaking when bottles were transported from one place to another by ships, carriages and trains. That's why Alexander thought of producing the bottles as squares. In addition to reducing bottle breakage, square bottles also give Johnnie Walker a great advantage in terms of taking up less space in logistics and distinguishing the brand from other whiskeys on the shelves.

One of the most distinctive features of the brand today. 24 degrees sloping label design also emerges under these branding efforts (1877). The curved design not only makes it possible to write more text on the label, but also becomes another striking element on the shelves for the consumer.

As you can see, Johnnie Walker's familiar "Label" The phrase has not yet entered our lives. In the following years, when customers order in the markets, instead of saying the long names of the whiskeys, "Can you give me that black label?" Long names are replaced by colors over time. Old Highland, Special Old Highland and Extra Special Old Highland are called White, Red and Black Label, respectively.

George Paterson and Alexander Walker, who managed the Johnnie Walker brand in the early 1900s, search for an attractive logo for their brand as part of branding. After a long search, they finally meet the right person, Tom Browne...

a young cartoonist Tom Browne he starts scribbling on the back of the menu during a lunch. These doodles of Tom are the first drawings of the "Striding Man" logo, one of the most iconic logos in history, which has survived to the present day. 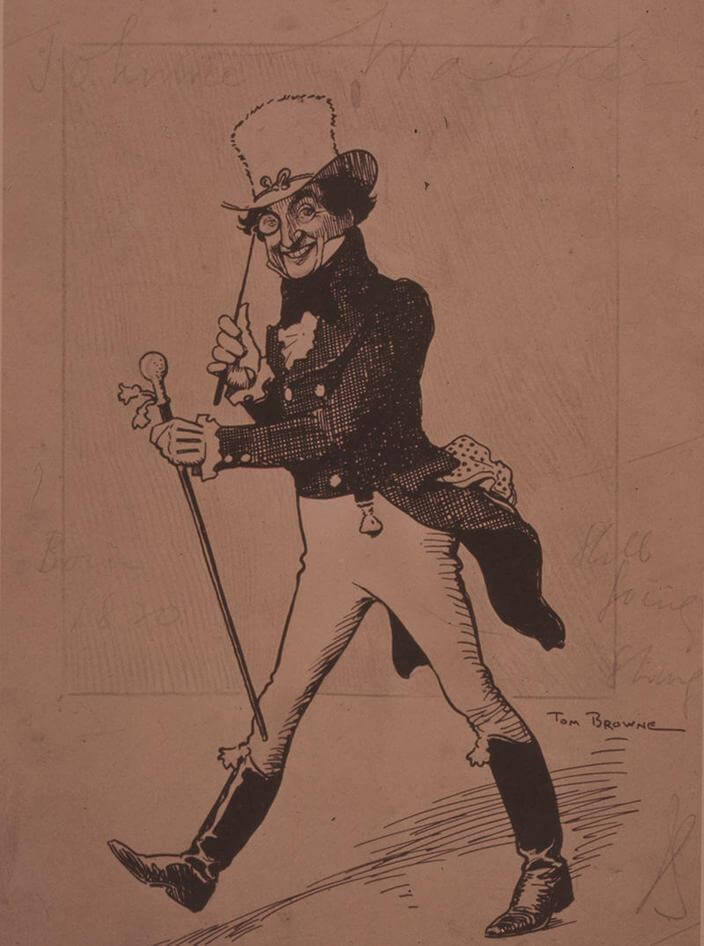 In the following years, Johnnie Walker broadened his distillery portfolio with the purchases of Clynelish (1915), Dailuaine-Talisker (1916), Mortlach (1923).

Johnnie Walker, who has appeared in many movies and TV series, has made a lot of noise with his collaborations with Formula 1 and Game of Thrones. 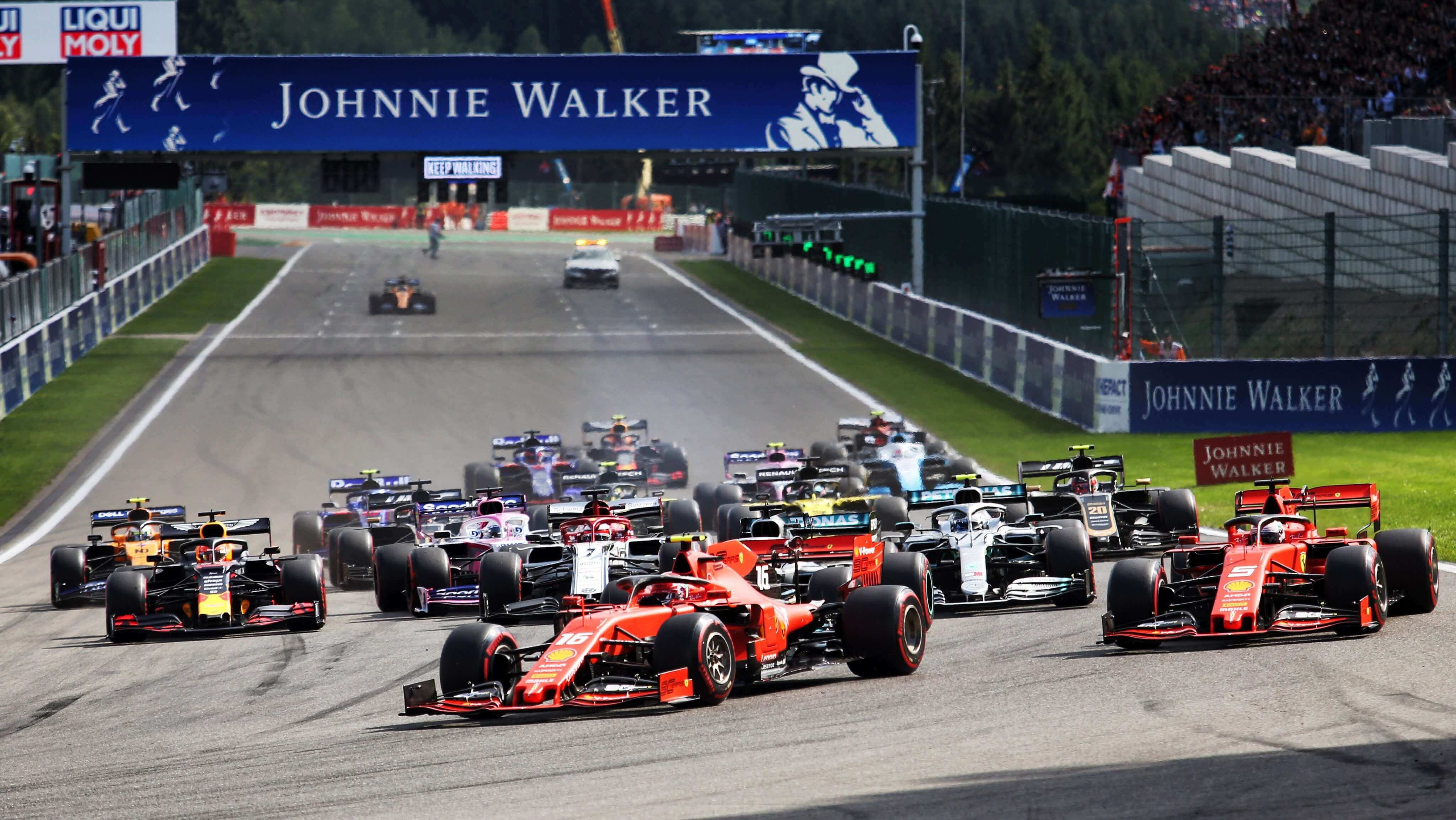 Winning awards in many international competitions every year, Johnnie Walker managed to win a gold medal with his six expressions in the Scotch (Scottish) category at the 25th International Spirits competition, which was held this year. 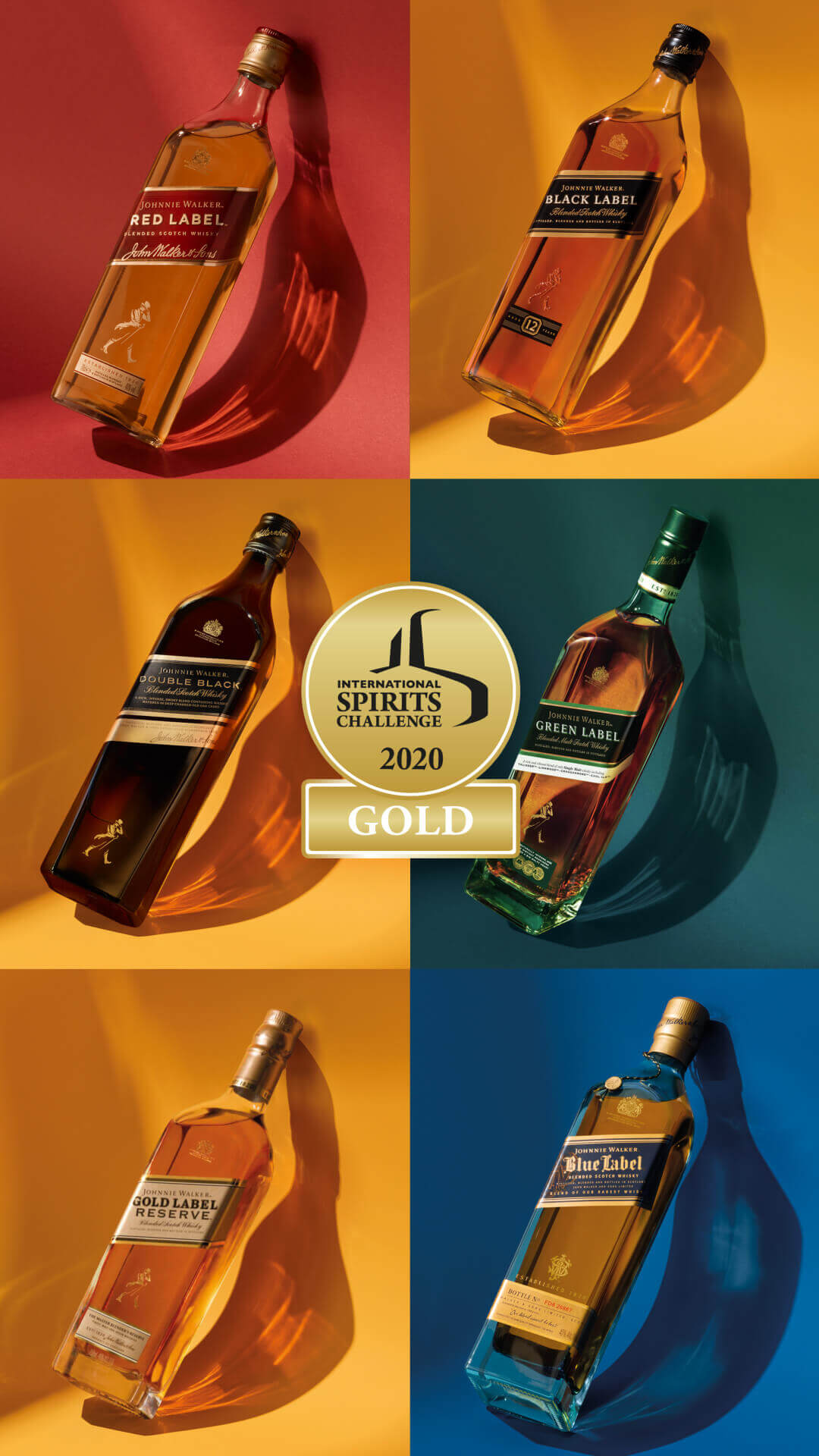 Johnnie Walker has a variety of expressions in his portfolio that I cannot include in this article. Therefore, in this section, I will share with you the expressions in the main portfolio of the brand and the bottlings it has recently released.

and more… To the tasting notes of all the expressions from this link . 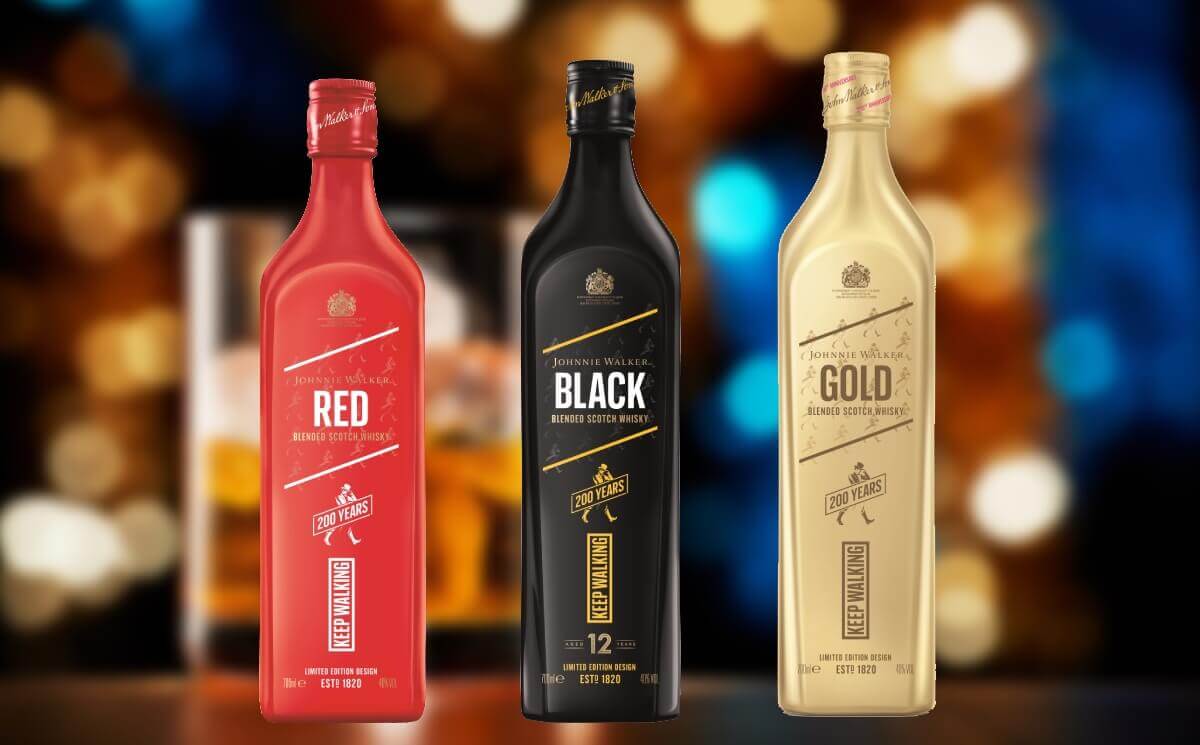 Johnnie Walker through the years

1820: Opening of the shop in Kilmarnock, which will turn into a world brand in the coming years.

1857: After John Walker's death, his son Alexander takes over the business.

1920: The distribution of John Walker & Sons whiskey reaches 120 countries. Even Coca Cola has not yet crossed the Atlantic Ocean...

1992: Johnnie Walker Blue Label, the oldest expression of the brand, is launched.

1995: Based on the collation notes of the Alexander Walker II, the johnnie Walker Gold Label was created.

2009: The legendary advertisement of the brand, in which Robert Carlyle takes the leading role, is published "The Man Who Walked Around the World".

2018: Exclusive to the Game of Thrones series White Walker available in a limited number of markets. In the same year, the most talked about Jane Walker is introduced.

Written by Johnnie Walker, the legendary 2009 ad starring Robert Carlyle “The Man Who Walked Around the World” I want to end with Carlyle has wonderfully described his journey from the birth of the brand to the present day with his magnificent Scottish accent.

Everything You Need to Know About Blended Whiskies…