Although these steps differ slightly depending on the country, region, geography or distillery, basically all distilleries apply these steps in the same order and logic.

Water, grain and yeast form the basis of whiskey production.

Grain The selection varies by country, region or distillery. For example, barley is used as the main grain in Scotland, corn and/or rye is used in America, and barley and wheat are used in Ireland. In addition to these, rice and oats are also used in whiskey production in various countries. 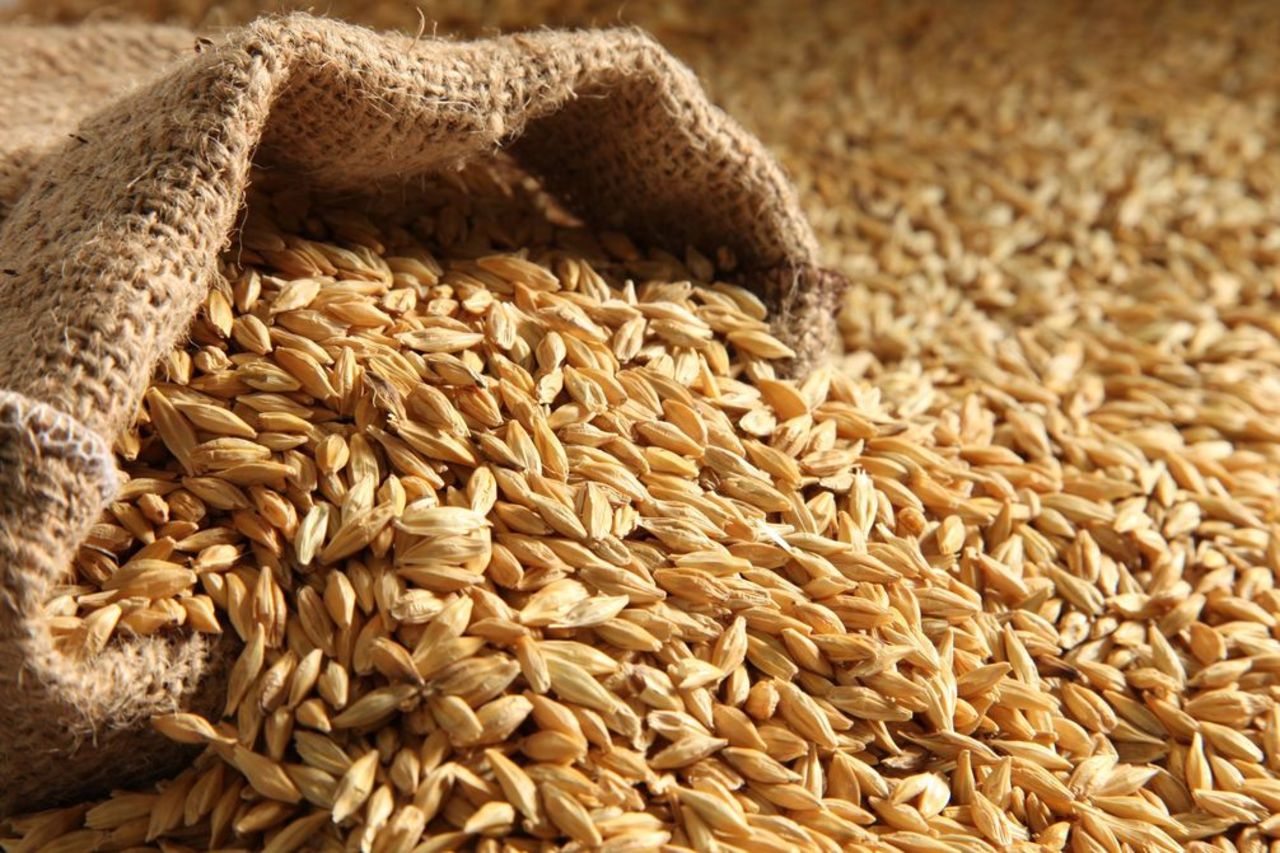 We can cite Scotland as an example. Scotland is one of the world's leading countries in terms of water resources. In whiskey production in Scotland The use of soft and high quality spring waters filtered from granite rocks in the mountains is one of the most important reasons for the quality of Scottish whiskeys.

let's come “How is whiskey produced?” to the question. In this article, I will try to briefly explain the basic stages of whiskey production.

The malting phase begins with the barley soaked in water for 2-3 days. Barley that absorbs water softens and spreads across a room to sprout/germinate. 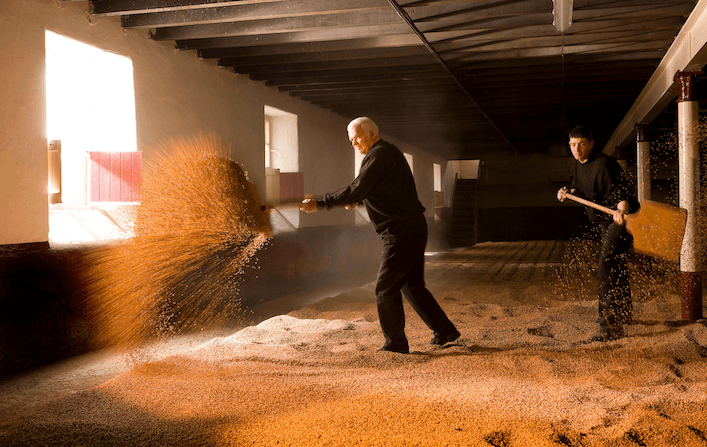 This shoveling process, which must be done every day, is a movement that requires a lot of effort. Distillery employees who have been doing this for many years “Monkey Shoulder” occupational disease occurs. We can summarize this discomfort as the shoulders being higher than that of a normal person.

To honor people who have devoted their years to this work balvenieThere is also a whiskey named Monkey Shoulder, which is released by . 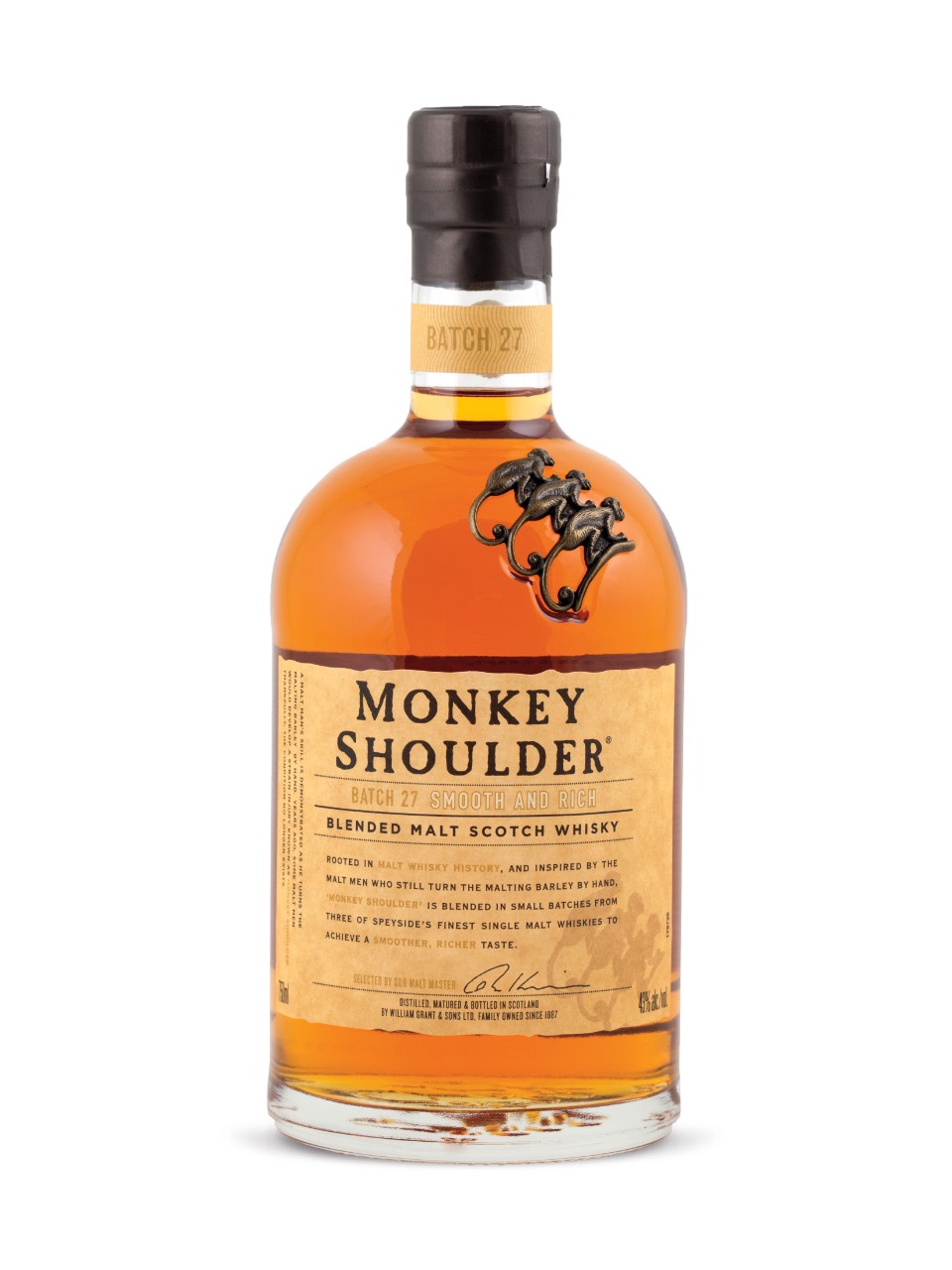 In order to stop the sprouting of the barley, the barley is taken into a room with a giant oven (kiln) under it and the coal or peat It is dried with the help of peat.

If peat is used in the drying process, we can expect smoked, sooty, salty, mossy or medicinal notes in the whiskey to be obtained. We can define peat briefly as a black, spongy hard coal consisting of decayed plant remains and moss. 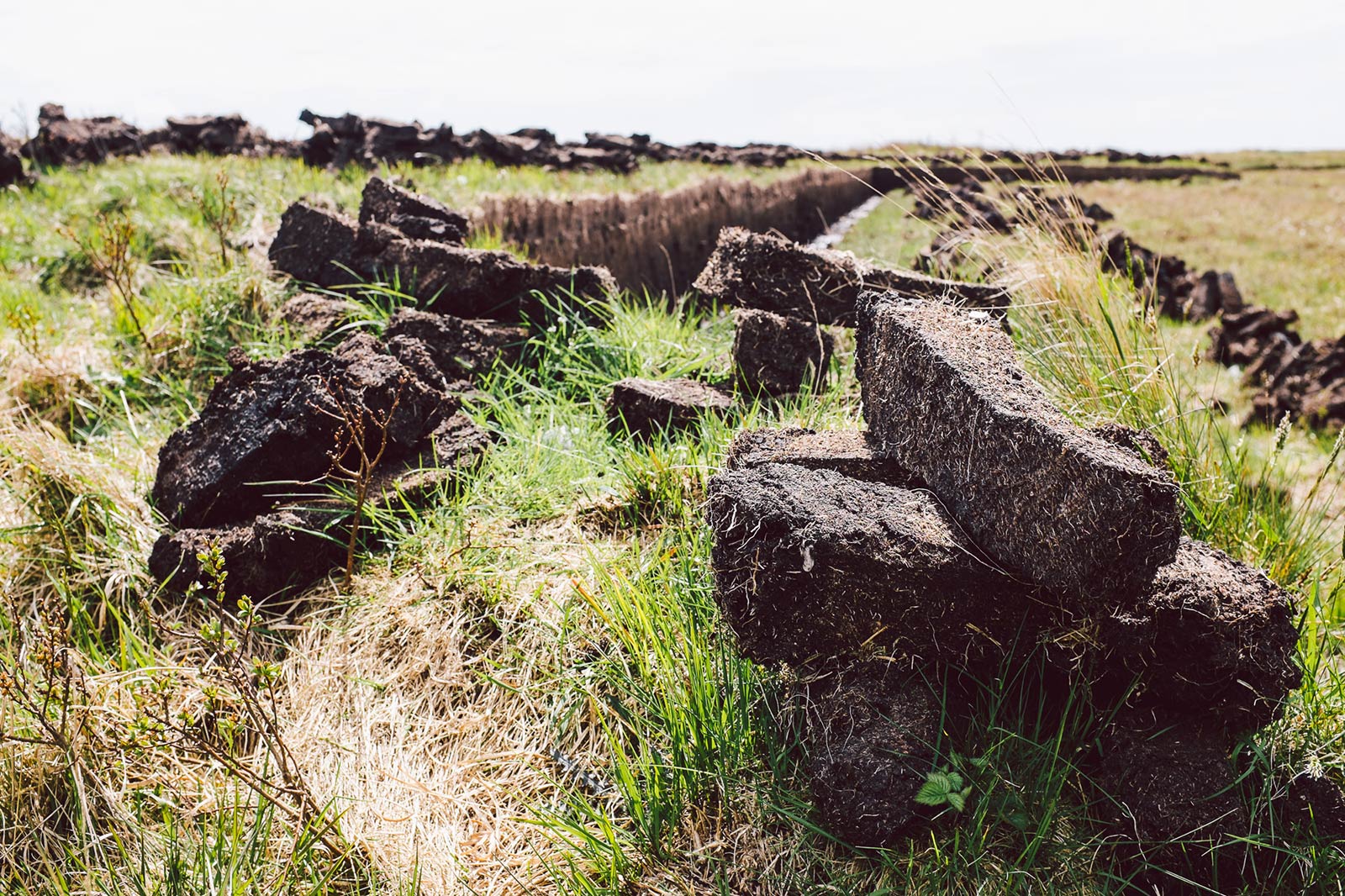 Malted barley obtained in the malting stage is ground with the help of mills. Afterwards, the ground malt is sent to a mashing tank called MashTun, where it is mixed with hot water and turned into mash.

The purpose of this step is to mix the malted barley with waters of different temperatures, to release the sugar in the barley at the maximum level.

To the mushy liquid obtained at the end of the mashing process Wort It is called (barley water).

Yeast is thrown into the mushy barley water obtained during the mashing phase. As a result, the sugar contained in the barley and released in the previous stages is converted into alcohol by reacting with the yeast. This process takes between 2 and 7 days, and as a result of this process, a liquid with an alcohol level of %7-10 is obtained.

The fermentation process is done in large tanks called Washbacks. Although many distilleries today use iron tanks, there are still some distilleries that use traditional wooden tanks.

Fermentation plays an important role in the character of the resulting whiskey. Even the slightest changes in factors such as fermentation rate and temperature affect the whiskey's tasting profile. 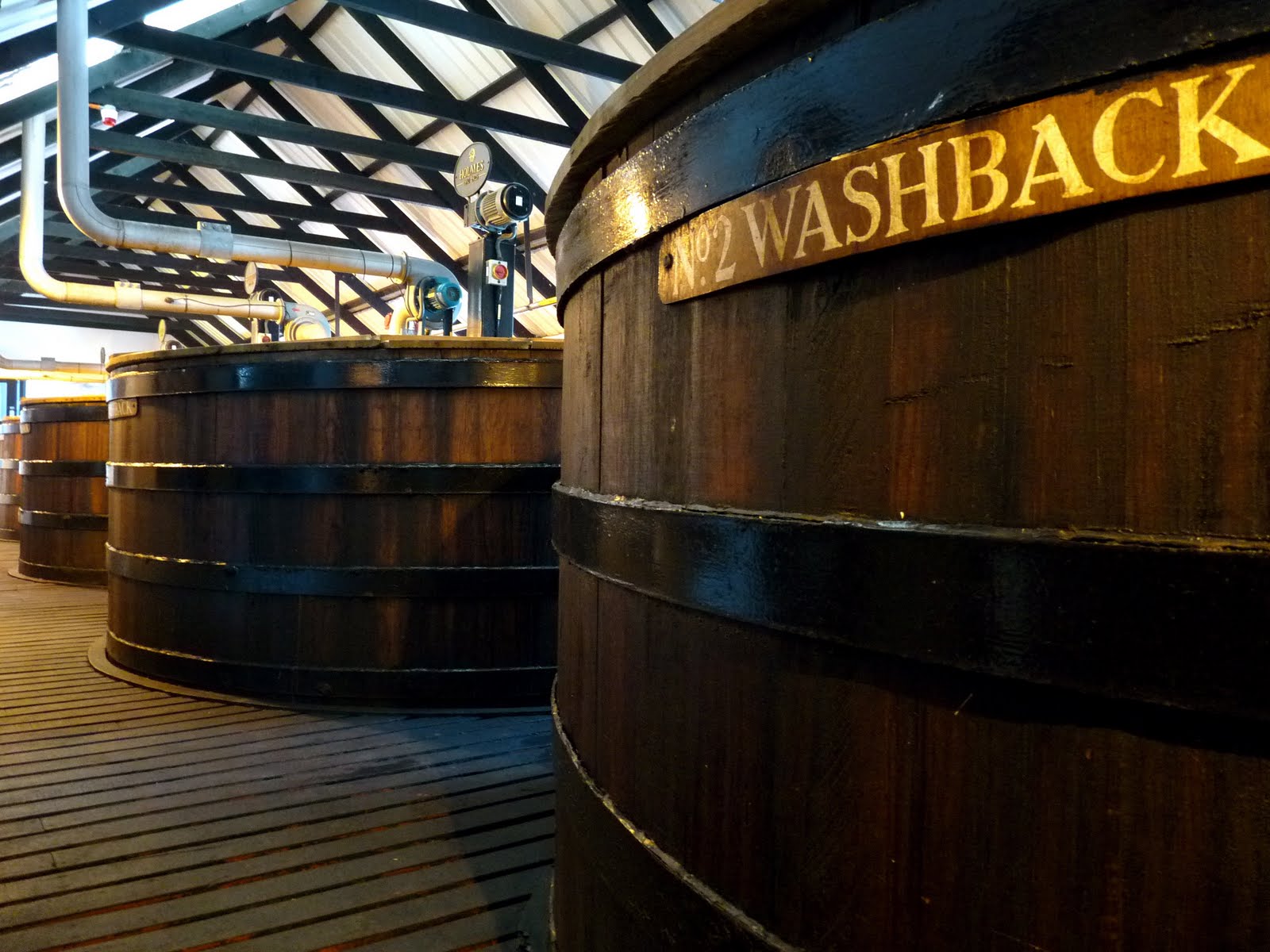 At this stage, the alcohol-water mixture obtained as a result of fermentation is taken into copper retorts and separated from each other by distillation method.

We can briefly summarize the distillation process as follows: 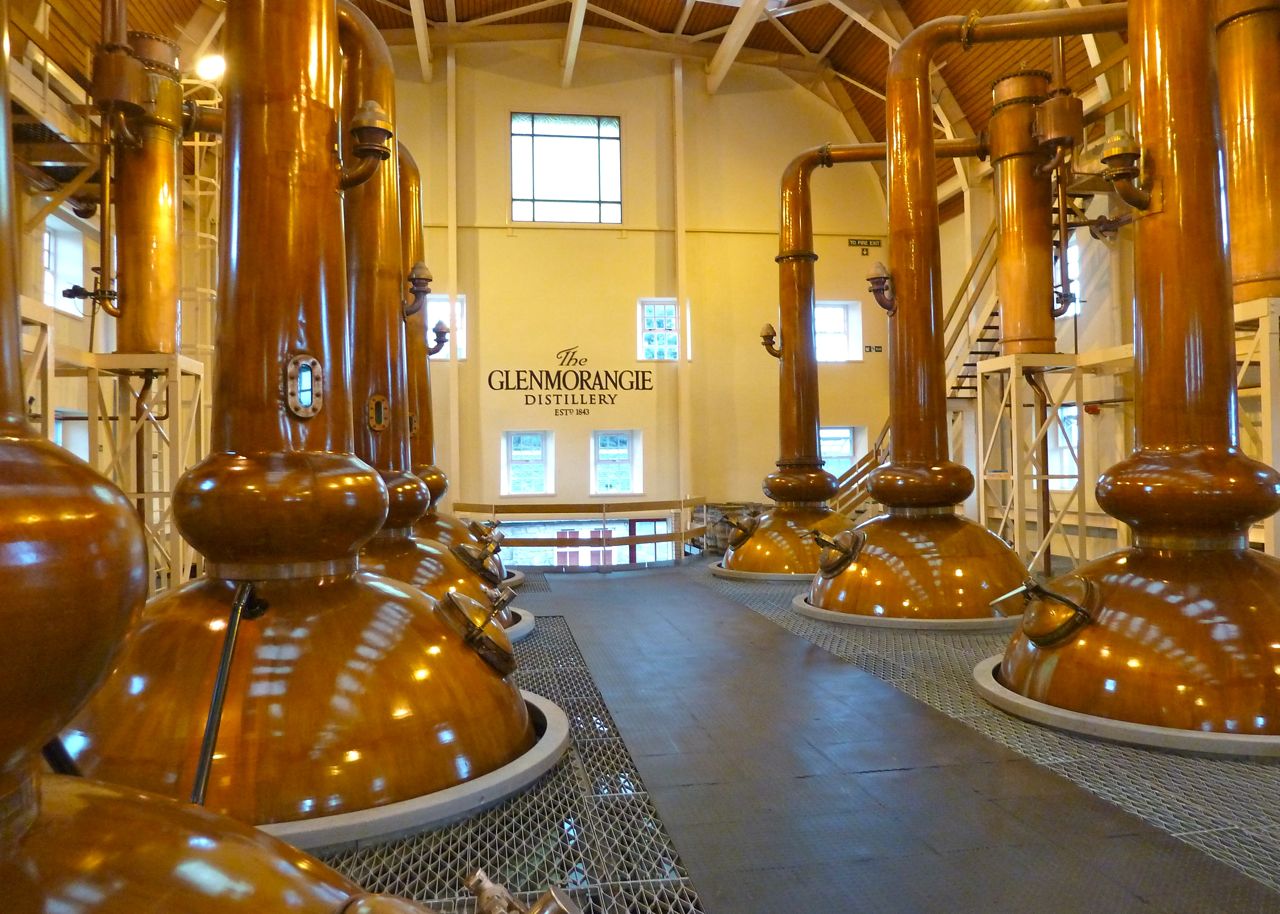 distillation process ScotlandWhile doing 2 times in IirelandIt is done 3 times. In fact, there are small quarrels between the two countries in this regard. While the Irish say that their whiskey is purer, easier to drink and therefore better because they distill their whiskey 3 times, the Scots respond to the Irish as "We make the whiskey you make by distilling 3 times, both twice and in a better way".

A little note: In ancient times, in the Lowland region of southern Scotland, whiskey was distilled three times, just like the Irish did. However, nowadays only one who follows this traditional method Auchentoshan There is a distillery.

The alcoholic liquid obtained as a result of the distillation process (we still cannot call it whiskey) is filled into oak barrels and left to mature for a certain period of time.

According to Scottish law this period must be at least 3 years. However, at the end of this period, the alcoholic liquid that comes out of the barrel can be called whiskey.

There are also whiskeys that are bottled without adding any water as it comes out of the barrel. To these whiskeys "cask strength" they are called barrel-hard whiskeys. As an example of these Aberlor A'bunadh, Ardbeg Uigeadail and Red Breast 12 Cask Strength.

Talking about the maturation of whiskey, a whiskey term that I like very much. "Angels' Share"It is impossible not to talk about it.

Whiskey, which has been waiting in barrels for years, evaporates at a certain rate every year and mixes with the air. While this rate is %2 in Scotland, this evaporation rate varies according to climate and environmental conditions. The Scots believe that this whiskey, worth millions that flies out of their barrels every year, is taken by the angels as a price for making good whiskey.

The process that I tried to summarize briefly in this article describes the production of a single malt (single malt). Although basically all whiskey manufacturers apply these steps in the same order and logic, each step may show slight differences in itself. Thanks to these differences, hundreds or even thousands of whiskeys with different characters emerge.

In other words, thanks to these differences Talisker While we are enjoying a sea breeze on our palate with salty, mossy, sooty notes while drinking, Glenfiddich With its fruity, sweet aromas, we can sip our whiskey as if we were in an orchard…

For detailed information about Whiskey Varieties…

For other basics about whiskey…

For basic information about Scotch Whiskeys…